China is a country of staggering contrasts, from its ancient civilization to its bustling skyscrapers and from its steep river valleys to its harsh desert landscapes. In this documentary,embark on an epic cross-country journey, spanning 5,000 years of history and soaring over natural wonders like Mount Everest and man-made marvels like the Great Wall of China. With breathtaking aerial views and on-the-ground human stories, China From Above Season 2 bears witness to this remarkable nation like never before.

China From Above Season 2 was produced by NHNZ and CICC. I am very proud to not only be one of the four directors this season, but also the only female and Asian director on the team. I went to some truly amazing locations in China and met many unforgettable people on my way.

For Episode 1, “Dynamic Coast,” we were in Houtouwan. It was such a surreal experience to see a deserted village become completely overrun by vegetation; an urban world reclaimed by nature.

In Episode 2, “Mountains and Rivers,” we were in Tibet, filming at Everest Base Camp, which was an unforgettable and life-changing experience. We joined villagers for their most important religious and social events. In Longmen Grottoes, we filmed how archaeologists were using cutting-edge technology to preserve Buddhist heritage. For the underwater archeology story in Qiandao Lake, we filmed underwater in 4K at depths up to 40 meters. And with the helicopter rescue story off the coast of Shanghai, we flew over the rescue vessel and conducted helicopter-to-helicopter, and helicopter-to-rescue personal tracking shots in the air!

China From Above Season 2 has been aired around the world, including on the National Geographic Channel, CBS, Smithsonian Channel, Sky TV,  Amazon Prime, and more.

As part of Western Academy of Beijing’s journey to achieve and embody the future of learning, WAB reinvented itself with truly innovative learning spaces. As a pro-bono project, I directed, produced, filmed and edited a video to showcase these wonderful new spaces and help the community to understand not only the science and thinking behind the design, but also how these new spaces can help students realize their learning potential.

I was recently featured on the World Fixer Blog for an interview on filming in China. Click on the image below and take a look! 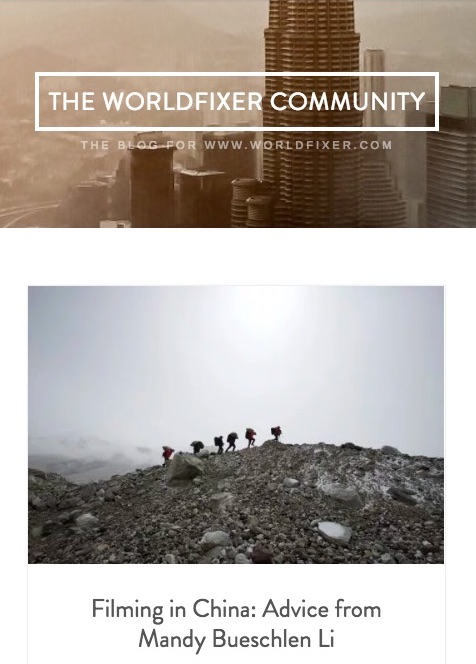